Our son turned 11 about 4 weeks ago and is now in his last year of primary school. When he moves up to High School next September he will have to catch a bus to school as the High School is in the next village about 3 miles away. He will have to leave the house about 7.40 am and then come home sometime after 4 pm.
Since October half term last year, he has been walking to school on his own if I am on a late start at work. Since half term of the summer term this year, he has been allowed to walk home on his own when my husband was on his day off. New key cut for him and attached to his rucksack so that he can't leave it in the door when he got home!
This term, we have made a decision to try and get him more confident with coming home alone and have allowed him to walk home to our house each day and be home alone for approximately 45 minutes if I am on an early start if he has no after school clubs, in which case he would not arrive home until after I have got home.
Tuesdays are football after school club. I got home at 4.15, he should arrive home by 4.30 at the latest.
4.50 pm - no son. It is parents evenings this week along with a book fair at school. He volunteered to help yesterday, which was no problem, so I thought maybe he had popped in there again tonight after football. Walked down to school - no sign of him, book fair packed up, no football coach around, saw the after school club supervisor - who knows him - but she hadn't seen him either.
Looked in and around the school - still no sign.
Came home and started to phone people - started with one of the football coaches - his mum runs the local Guide unit so had his phone number! This coach hadn't been at football this evening so couldn't tell me - but did offer to ring around if I hadn't found him later on.
Rang 3 other mums who all said the same - he had been at football, but they hadn't seen who he left with! Panic starting to set in.
Rang a few other friends houses with no luck.
At 5.20 pm decided to bite the bullet and ring my husband just to check if he had told him to go somewhere else after football.
Husband hadn't - definitely not a happy bunny. He was working late tonight about 50 minutes drive away and would not be home until later. Told him I would ring him and let him know when I found him.
Decided to go and drive around our village - as I pull out of the drive, one grass covered child cool as a cucumber walks into our cul-de-sac!
Parked the car and asked him where he had been. Ben's house he replied! Where does Ben live I ask -on the green round the corner from school!
Once inside the house, I explained to him - calmly for me - about how worried I had been and that I had been ringing lots of parents trying to find him!I also told him how sick I had felt not knowing where he was. He should have come home straight from football, or at least rang me from Ben's house to let me know where he was and what time he would be home.
I also said that if he couldn't be trusted to come straight home, then he will have to start going back to the childminders after school - this is not something he wants to do.
Rang my husband but he was unable to come to the phone - his boss took the message and said he would let him know. 5 minutes later, hubby rings back. I explained to him where he had been and that we had discussed that it had been wrong to do it. Hubby's reply - keep him up until I get home !!!
That is not a good thing. Told son that daddy is not happy with him and that the mood he will be in tonight when he gets home, will be a mood he will never want to see again, so tonight will be very fraught I think.
Of course I am now wondering if this is a good thing allowing him home after school on his own to build up his confidence and for him to get used to being home alone?
I am hoping that after this episode this evening that it is something that will never happen again but do I trust him not to do it, or do we revert back to him going to the childminders?
Will have to wait and see the outcome of the discussion between him and dad tonight!
Posted by Blue Wellies at 18:09 No comments:

Sleepover at the National Space Centre 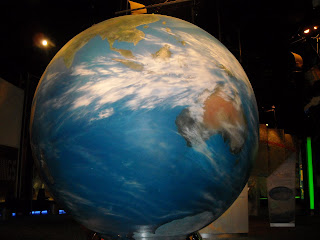 Well, I'm back and very tired but it was an experience! There were 100 Brownies and Guides along with plenty of Young Leaders and Guiders. This is what I slept under last night along with 24 Brownies from a Pack who I had never met and to be honest, there's a few I would prefer not to meet again!
I managed to arrive about 10 minutes before the stated arrival time for all the leaders - despite our city centre being closed off because of some protests that were happening and having to do a 10 mile detour - to find that because some of the girls were arriving by coach with their leaders then they were already there!! Therefore I was quickly introduced to the brownies and then left with then all while their Brown Owl went off for the leader talk - would have been good to have gone I think?
The National Space Centre had everything well planned out and thumbs up to them for a great time. Unfortunately it would have been better without the non-behaving brownies!
We had quizzes and word searches to do on arrival while we waited for the last of the Brownies and Guides to arrive. Then we had a quick welcome from the organiser, a safety talk from the Space Centre Staff, and then we were split up into 4 groups to go and visit all of the galleries. Two areas were out of bounds for the visit and I believe that they are always out of bounds - not sure why?
Spent about 60 minutes doing the galleries and then we went into the theatre dome for the first of two shows. Very informative but because it was a 180 degrees show, very queasy!
Then we went for our packed suppers, then spent just over an hour doing some craft, split into two groups and one did hand puppets, astronauts, Hubble telescopes and satellites while the others made rockets and then took them outside to fire them up the walkway by the front door. Then swapped over and did the other crafts. Went back in for the sky at night show - I declined to go in which was just as well because we were waiting for one set of parents to pick up a child who wanted to go home and another one wanted to speak to mum and dad as she was homesick - good for her though as she decided to stay after that phone call.
After that it was 10.30pm - time for bed!
Lights went out around 11 pm and they all finally fell asleep around 2 am :(
Woken up at 7 am, time to pack, clean teeth, have breakfast and visit the shop if you were a guide - it had been decided that the brownies would not be allowed din the shop much to their disgust!
Home time 9 am - I got home just before 10 am
The National Space Centre is not as good as Conkers for visiting - I wouldn't go back time and time again which I have with Conkers, but as a sleepover destination, it is very good. The staff from the Centre sleep on site as well, so only do aim do a few each year - they have done 3 this year, mine will be the first next year.
The children were on the go from the minute they arrived and everything was well organised from both the Centre's point of view and the Brownie organiser.
My only gripe is about the behaviour by the girls who were given a very unique opportunity to sleep somewhere extremely special :)
The Division they are from is a privileged area, and so usually money is not an obstacle for them - although there will always be an exception to the rule. However, the behaviour demonstrated by these children, leaves me in absolute disgust at both the parents and the school about how they discipline their children and teach them manners.
While I can accept that there will always be problem children, the number who appear to be in this Division is unbelievable especially as this is a small Division because of its locality in a very rural setting!
Maybe, our village is very fortunate to have a school which ensures that manners and politeness will always be a high priority and that we have very good Brownies?
Anyway, this sleepover has given me a good idea on what to expect and I now have a lot of work to do between now and February - the first of which is to chase the other District Brownie Units to see if they want to come as no-one has replied to an email about coming along - can't be bothered? Probably not!!
Posted by Blue Wellies at 10:25 No comments:

Well it's been a long time since I last blogged!
Much has happened - I resigned as both DC and holiday advisor in June and have left things to them all. I was professional about it and made sure that I handed over everything which needed to be done, even made a disc with all the paperwork on as a back up!
Despite handing over two jobs I still seem to be lacking a lot of personal time - why haven't I found some more time?
I was fortunate enough to go to the Guiding Centenary Camp at Harewood House as part of the CAST team - the adults who supported every activity going on - and met some fantastic people and have made some great new friends.
After that experience I have now volunteered to go and help at Charnwood 2011 international camp as part of the first aid team - that will be fun too!!
Work remains a challenge especially as the other sister has been told to improve her performance or risk being performanced managed in another 4 months time and then being downgraded, so she is now trying to be very proactive but failing miserably and making everyone's life a misery at the same time - oh well.
I hope to start blogging a bit more regularly now but time will only tell - I will make more time for me!
I am off to the National Space Centre this evening to help another Brownie Holiday Advisor with her large scale holiday licence but also as a bit of background research as I'm going to be taking 100 girls there in February so this will hopefully give me a bit of a head's up of what to expect.
Will tell all tomorrow
Posted by Blue Wellies at 14:29 No comments: