Guess where I am?? 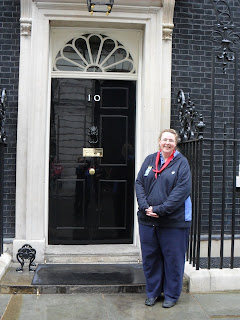 This is me on a recent trip to London - it took a lot of hard work but we managed to get permission to stand here!!!

This is one of my proudest moments

I have another photo of somewhere else we visited but I am not allowed to show it as it should not have been taken - naughty Guiders :)
Posted by Blue Wellies at 23:33 2 comments:

Things I have done since Feb 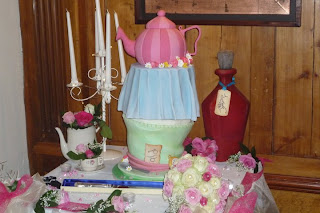 I have done lots of things since I last wrote a post - this cake is my favourite picture of all the things I have been to! This was the cake at my baby brother's wedding April - the theme was Alice in Wonderland and instead of a traditional wedding breakfast we sat down to the Mad Hatter's Tea Party - much to my husband's disgust - "where's the proper food?" he muttered under his breath as they brought out sandwiches, finger food and scones and clotted cream!
I came to the conclusion that my baby brother must love his wife very much to have this as his theme! The day was great - my new sister-in-law is Italian and so there was a lot of family and lots of Italian traditions throughout the day and it was a one of the best - and weirdest - weddings I have been to.
The little man has been all over the place with Scouts - he has been on a walking holiday over the Breacon Beacons, several night hikes, he had a practice camp in May half term for a local competition camp which was to be held in June - last year they were the worst performing patrol and did not even gain their camping standard! This year they were 3rd in the competition out of 12 patrols, gained their camping standard and were even congratulated on going from last to 3rd by the District Commissioner! My son has worked out that he will be the PL for next year's camp and is determined to win - "we will beat the girls next year Mum!" He was also made a Patrol Leader at Scouts in January - he is only 11 - and has become very keen to try and get his Patrol to work well together as a team and so then enjoy all the activities.
The big event in his calender - and mine - is next weekend. We are both off to Charnwood 2011. This is an international Scout and Guide camp which is held in our area every 5/6 years depending on what is happening elsewhere! I will let you know how that goes but I am hoping that it will be as good as the Guiding Centenary camp I went to last year!
I have spent Bank Holiday Monday with one of my closest friends who has moved away to Suffolk about 3 years ago and although we don't see each other very often we keep in contact via text, email and Facebook!We had such a lovely time - lunch in the local pub, then went to a vineyard and just had a lovely day all round. I wasn't able to stay so had to drive there and back in the same day but it was well worth it!
As a family we have had our first weekend away in just over 5 years! We went to Centreparcs and even though we haven't been to one in this country before as a family - I had been to this one with Guiding in January as a chill out weekend post centenary - we had a lovely time. Hubby and monkey went and did the high ropes activity, as a family we spent about 3 hours plus each day in the pool - monkey mainly on the rapids! - and we played crazy golf on the Sunday. The holiday could have been very expensive but we managed to keep a sensible eye on the money.
A cousin got married about 6 weeks after my brother - a totally different wedding. This was mainly due to the fact that my Uncle is quite unwell and the decision was made to do it quickly and quietly, but it was lovely and we were able to get together as a family and enjoy all of our time together.
Work remains frantic at the moment but that is more to do with the fact that out of 12 staff with annual leave, maternity leave and sickness we never seem to have more than 8 people available to work at any one time and so we are busy. Luckily, we have not had many patients through so things haven't been dangerous!
I have met up with friends for meals and evenings of lots of laughter, I have also supported another friend through the death of her partner's best friend and even went to the funeral to hold her hand while her partner was carrying the coffin in for the service. Even though I had never met Daggy, I was very touched by the funeral - it made me think very hard about what I would like - he was only 45 years old.
We have been to see Harry Potter - both parts of the Deathly Hallows - as a family and we have now seen them all - how sad it has finished! I am sure we will start to watch something else!
Now we are in the second week of the school holidays - monkey is at Mum's until next Thursday and then will be back to go to Charnwood. After that we have another week together and then he goes back again! And then we are in the last week of the holidays and then he moves up to Big School - it only seems like yesterday that he was off for his first day in Reception - not 7 years ago. Time is definitely flying, it needs to stop now!
I promise - fingers are crossed though! -that I will try and write more often, I just need to find a bit of time in my life! See you soon
Posted by Blue Wellies at 11:37 No comments: