Each year, our small work department, has a Petanque challenge. Since starting there, I have never managed to make the night as they tend to hold it at the end of June, usually on my husband's birthday!

This year, they have held it at the end of July - I duly signed up, and then thought last week about asking the boys if they would like to come along too!

So the evening looms -  it was forecast for heavy rain - and yep, there was heavy rain all night! The mood was somber in the car on the 40 minute drive out to the pub where it was being held, hubby apprehensive about being in a social situation with people he didn't know and not having alcohol to boost his confidence, monkey sulking as he had an evening planned in front of the X-box!

However, once we were there, things got better! We were pitched against a team where I only knew one person but we all got on and had some fun. Having never played Petanque before, we all just reverted back to the game we knew it as - boules from monkey's younger years.

The pitch was muddy and each time we threw a boule, a divot appeared in the ground! The rain poured, the boules were muddier each round and there was nowhere to wash your hands in between throws - they needed a bucket of water to dip your hands in to wash off the mud and to wash the boules with too!

We were the first match to finish - there were 4 other matches going on as we had about 20 people there. We thrashed our opponents - 14 - 1. They were happy though as they wanted to win Valerie the Wooden Duck and Spoon - the booby prize!

We won a commemorative plate - a large oval plate which was "borrowed" from the pub the first year they held the challenge and which someone has subsequently decorated and added the names of the winning team from each year on the back!

This year, our team name will be proudly written - No ifs, just buts - this was the best we could come up with as Far Canals, Norfolk and Hope, Ginger Nuts and Ginger Buts were all rejected!!!

Food followed and monkey was very polite and held his discussions well - loved the part where he was telling a consultant how protein works with his gym routine and muscle build-up!!! To give him his due, the consultant was very good and sounded impressed with monkey's knowledge!

Hubby offered to drive, so I was able to have a couple of drinks which was good too!

All in all a good night and the boys seemed happier on the trip home  - looking forward to more of these nights out soon!
Posted by Blue Wellies at 10:27 No comments: 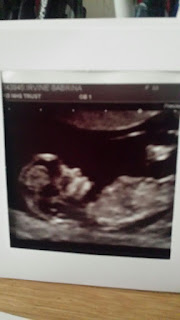 Today, I have been sent this picture.

To sit and look at it breaks my heart, while at the same time, being ecstatically happy for my baby brother and his wife.

While I understand that they have been trying for a couple of years now to get to this point and have had to undergo IVF to get to here, the other part of me, feels distraught and unable to put on my happy face.

It reminds me , yet again, what a failure I am. I have only been able to carry one baby to full term, had at least 2 miscarriages, if not more, have also undergone IVF - but ours was not successful.

I know that there are still another 28 weeks to go for my sister in law, but to have got to this point is a major step for them.

I have sent my congratulations, told monkey that he will have another cousin just after Christmas - out of all of the cousin pregnancies, I think he will be the happiest about this one - this uncle and aunt are his favourite - he was an usher at their wedding but only because he was too big to be a page boy!

I am still estranged from this side of my family, I understand that our middle brother has sold his house and is about to move, but he is yet to tell me this or provide me with his new address - maybe he is waiting for it all to go through.

I have no desire to see my Dad's wife, but with this new one arriving, it may make things very difficult, or it will just emphasise once again, that we are not really welcome in her house at any time.

Time will tell, but in the meantime, I will continue to hope that all goes well for my sister in law and that she has a good pregnancy. I know the birth will be difficult, as she had a fractured pelvis when she was 16 following a road traffic accident when in Italy, so there will be added complications with the birth - with my knowledge of midwifery, I would think she may have to have an elective section - not the best thing to start your life as a new mum as, but she will cope - she has a very large Italian family and of course, my Dad's wife!

Posted by Blue Wellies at 22:24 No comments: